Ransomware Is Becoming A Threat To Cloud Services, Too

Think your users don't need security awareness training because all of your files are in the cloud? Think again. Investigative Reporter Brian Krebs has a blog post that proves it can easily happen. He started with:

"Ransomware — malicious software that encrypts the victim’s files and holds them hostage unless and until the victim pays a ransom in Bitcoin — has emerged as a potent and increasingly common threat online. But many Internet users are unaware that ransomware also can just as easily seize control over files stored on cloud services.

Toni Casala found this out the hard way. Casala’s firm — Children in Film — works as an advocate for young actors and their families. The company’s entire operations run off of application hosting services at a managed cloud solutions firm in California, from QuickBooks to Microsoft Office and Outlook. Employees use Citrix to connect to the cloud, and the hosting firm’s application maps the cloud drive as a local disk on the user’s hard drive.

“We were loving that situation,” Casala said. “We can keep the computers here at work empty, and the service is very inexpensive when you compare it the cost of having more IT people on staff. Also, when we need support, they are very responsive. We don’t get farmed out to some call center in India.”

They were loving it, that is, until just before New Year’s Eve, when an employee opened an email attachment that appeared to be an invoice. Thirty minutes later, nobody in Casala’s firm could access any of the company’s 4,000+ files stored on the cloud drive." Click here to read how much time it took to get back online, yikes!

Regarding Ransomware, the police probably can’t help you. This is an article in Fortune Magazine that I was interviewed for. Good ammo to send to management. Short and understandable: Click here to read.

Paying It Forward: 'Social IT'

Catch us on the cover of ChannelPro!

Domitek Recognized for Excellence in Managed IT Services

Ransomware Is Becoming A Threat To Cloud Services, Too 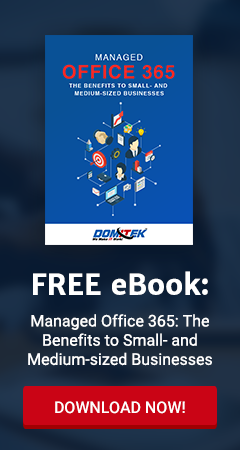